The summer solstice, which falls on 21 June, has special significance for us at OM – from what may have been the first observatory at Beaghmore Stone Circles, to our modern day version in Davagh.

Many believe that Beaghmore was designed over 3500 years ago to align with the sun during the solstice, to celebrate the start of summer and the return to light.  It can be a symbolic event to experience, with many people believing it connects us with our ancient ancestors. 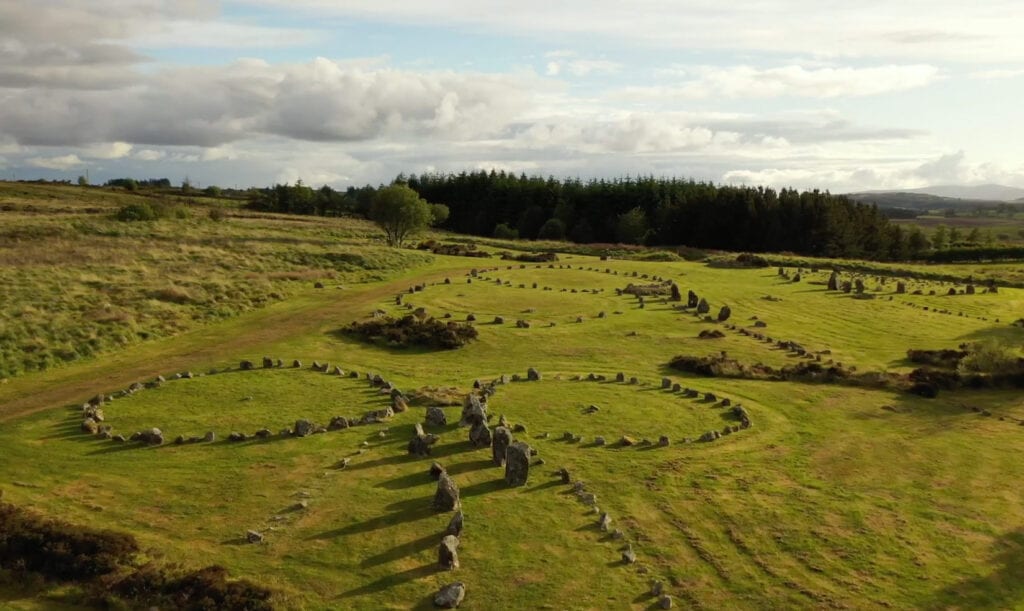 Our ancestors didn’t have clocks to calculate the length of day and night, but they could measure the Sun’s position geometrically.  People observed that the Sun’s rising and setting points moved slightly each day of the year. The Summer Solstice would occur when the sun reached its northernmost point. The Suns’ southernmost point marked the Winter Solstice. The two days of the year when the Sun rose exactly due East and set exactly due West marked the Equinoxes.

These astronomical phenomena were a reliable way to record the yearly/seasonal cycle and were incorporated into their cultural and religious practices. To mark and record these astronomical events permanently, the ancient Irish built great monuments of stone (like Beaghmore), aligned with the sunrise or sunset on these days.

It is a day that has been celebrated since ancient times and is one of the earliest astronomical observations in human history. When you visit an ancient site look up in wonder at the sky and reflect that the people that built the monuments observed the same sky, sun, moon and stars.

Book a tour of the Exhibition

We use cookies on our website to give you the most relevant experience by remembering your preferences and repeat visits. By clicking “ACCEPT ALL”, you consent to the use of ALL the cookies. However, you may visit "Cookie Settings" to provide a controlled consent.
Cookie SettingsREJECT ALLACCEPT ALL
Manage consent

This website uses cookies to improve your experience while you navigate through the website. Out of these, the cookies that are categorized as necessary are stored on your browser as they are essential for the working of basic functionalities of the website. We also use third-party cookies that help us analyze and understand how you use this website. These cookies will be stored in your browser only with your consent. You also have the option to opt-out of these cookies. But opting out of some of these cookies may affect your browsing experience.
Necessary Always Enabled
Necessary cookies are absolutely essential for the website to function properly. These cookies ensure basic functionalities and security features of the website, anonymously.
Functional
Functional cookies help to perform certain functionalities like sharing the content of the website on social media platforms, collect feedbacks, and other third-party features.
Performance
Performance cookies are used to understand and analyze the key performance indexes of the website which helps in delivering a better user experience for the visitors.
Analytics
Analytical cookies are used to understand how visitors interact with the website. These cookies help provide information on metrics the number of visitors, bounce rate, traffic source, etc.
Advertisement
Advertisement cookies are used to provide visitors with relevant ads and marketing campaigns. These cookies track visitors across websites and collect information to provide customized ads.
Others
Other uncategorized cookies are those that are being analyzed and have not been classified into a category as yet.
SAVE & ACCEPT